The last year was really hard for me, for a lot of reasons but mostly revolving around a major revision to my relationship with my children’s father. That led to a move of nearly 1000 miles. And in the process, I lost a precious box of cards and letters.

I am not a big saver of things, but I’ve kept cards for my entire adult life: thank yous from students, especially meaningful birthday cards, and notes of encouragement when I’ve gone through other tough times. I’d saved every anniversary card until I began the work of packing, when I made the decision to let them go. I’m fortunate that I have friends who are good writers (and some who are extraordinary card makers!), so many of the cards I continued to treasure were quite beautifully written and made, and they made the blow of removing the anniversary cards from my collection easier.

But now they, too, were gone. Amid all the other losses of the year, it felt silly to mourn something so small, but I was sad. So many of my happy memories had already disappeared, but those cards had felt sincere, and I looked forward to revisiting them as needed to remind myself of how loved I was.

Then, as I slowly shared the news of our move and the change in my marriage that led to it, cards began to come again. Before our boxes even arrived in our new home–so before I even knew that these reminders of support were missing–my friend N sent this one: 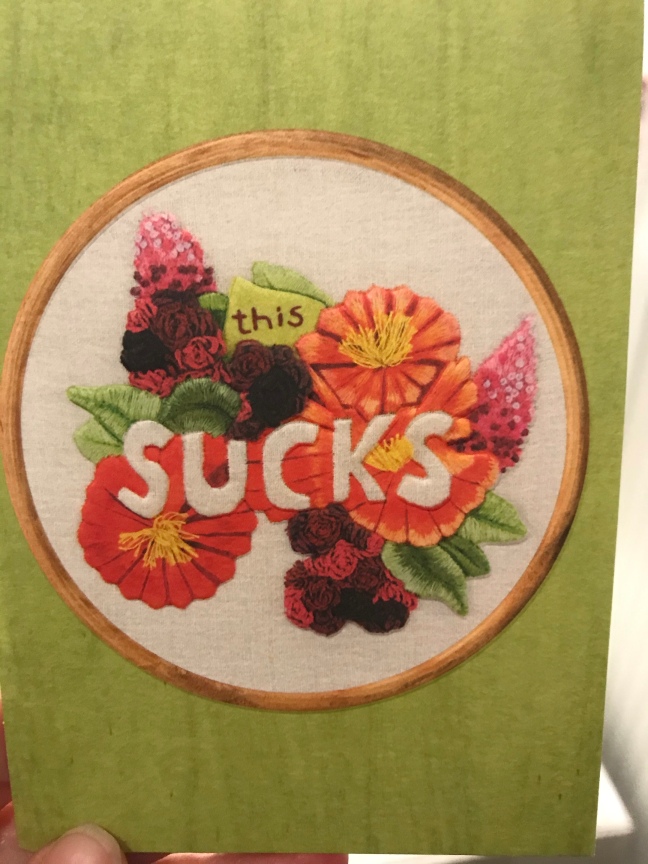 I was thankful when I opened it, glad to have the suckiness of the situation affirmed rather than ignored or glossed over or treated as a lesson I would learn from.

More came. A housewarming card from C, and homemade one from J, a real papersmith. My birthday approached, and I was sad–it was the first time in 16 years, the length of my marriage, that my husband’s aunt didn’t send a card. I felt the loss of his extended family sharply, a decision made for me that I didn’t want. But then my friend D sent a card of happy birthday wishes and also a second card, recognizing the difficulty of the moment. On my birthday, I woke up to find that my older son had crafted me a card by hand–not something he does for fun on his own, but that he had intuitively understood as important to me. 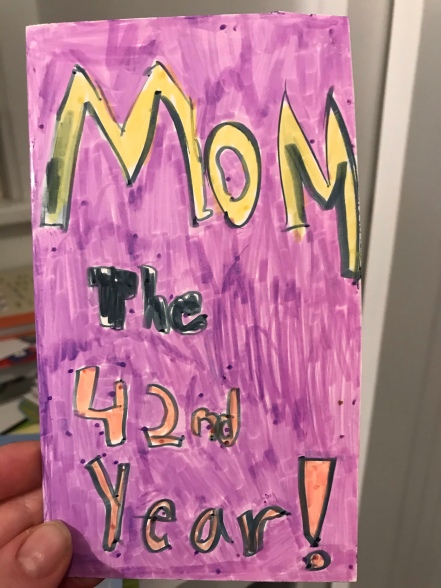 Inside: “Mom, I love you. I cannot tell you how grateful I am that you are my mom.”

And, a few weeks later, our mantle was filled with Christmas cards and letters from friends far and wide, including my husband’s aunt, who I’d come to see as my own. I shared in my own holiday letter a bit about the loss of our year. It was six months later, and while my local friends and closest relatives and friends knew, my extended family and friends I spoke to less frequently were only now hearing about the difficulty of the previous year. Whereas before, writing our family Christmas letter had been something I thought about  joyfully almost all year long, it had become one of my first worries after my husband left–probably because worrying about it helped stave off my fears about the more important things that were changing. But writing it was good for me, allowing me a chance to put into words a little of the loss I felt and offer it to people I know loved me.

“You are kind”–on days when it was hard to trust my own judgment of myself, the words of friends identifying good qualities in me helped orient me.

Within a few days of putting the letter into the mail, friends began to drop me notes, affirming me and my family. I know it was hard for some of them; it’s awkward to respond to the grief that someone else offers. But I was thankful every time one of them wrote. I felt that a story I can’t really tell–it’s too long and sad right now–was heard, that the grief I spoke was grief they shared.

Of course, you don’t have to be a letter writer to share love and support with someone, but, to me, building a new collection of letters and notes has been an important part of my recovery from a difficult year. (Today is a year to do the day since we first slept in our new house.) If you’ve send me a card, know that I treasure it.